All Collections
OpenAI API
Getting Started with OpenAI API
What are tokens and how to count them?

What are tokens and how to count them?

Written by Tabarak Khan
Updated over a week ago

Tokens can be thought of as pieces of words. Before the API processes the prompts, the input is broken down into tokens. These tokens are not cut up exactly where the words start or end - tokens can include trailing spaces and even sub-words. Here are some helpful rules of thumb for understanding tokens in terms of lengths:

To get additional context on how tokens stack up, consider this:

How words are split into tokens is also language-dependent. For example ‘Cómo estás’ (‘How are you’ in Spanish) contains 5 tokens (for 10 chars). The higher token-to-char ratio can make it more expensive to implement the API for languages other than English.

To further explore tokenization, you can use our interactive Tokenizer tool, which allows you to calculate the number of tokens and see how text is broken into tokens. Alternatively, if you'd like to tokenize text programmatically, you can explore libraries such as the transformers package for Python or the gpt-3-encoder package for node.js.

Depending on the model used, requests can use up to 4097 tokens shared between prompt and completion. If your prompt is 4000 tokens, your completion can be 97 tokens at most.

The limit is currently a technical limitation, but there are often creative ways to solve problems within the limit, e.g. condensing your prompt, breaking the text into smaller pieces, etc.

The API offers multiple model types at different price points. Each model has a spectrum of capabilities, with davinci being the most capable and ada the fastest. Requests to these different models are priced differently. You can find details on token pricing here.

The API treats words according to their context in the corpus data. GPT-3 takes the prompt, converts the input into a list of tokens, processes the prompt, and converts the predicted tokens back to the words we see in the response.

What might appear as two identical words to us may be generated into different tokens depending on how they are structured within the text. Consider how the API generates token values for the word ‘red’ based on its context within the text:

In the first example above the token “2266” for ‘ red’ includes a trailing space.

When ‘Red’ is used in the beginning of a sentence, the generated token does not include a leading space. The token “7738” is different from the previous two examples of the word.

The more probable/frequent a token is, the lower the token number assigned to it:

Prompts that end with a space

Biases for specific tokens can be set in the logit_bias parameter to modify the likelihood of the specified tokens appearing in the completion. Consider, for example, that we are building an AI Baking Assistant that is sensitive about its user’s egg allergies.

When we run the API with the prompt ‘The ingredients for banana bread are”, the response will include ‘eggs’ as the second ingredient with a probability of 26.8%. 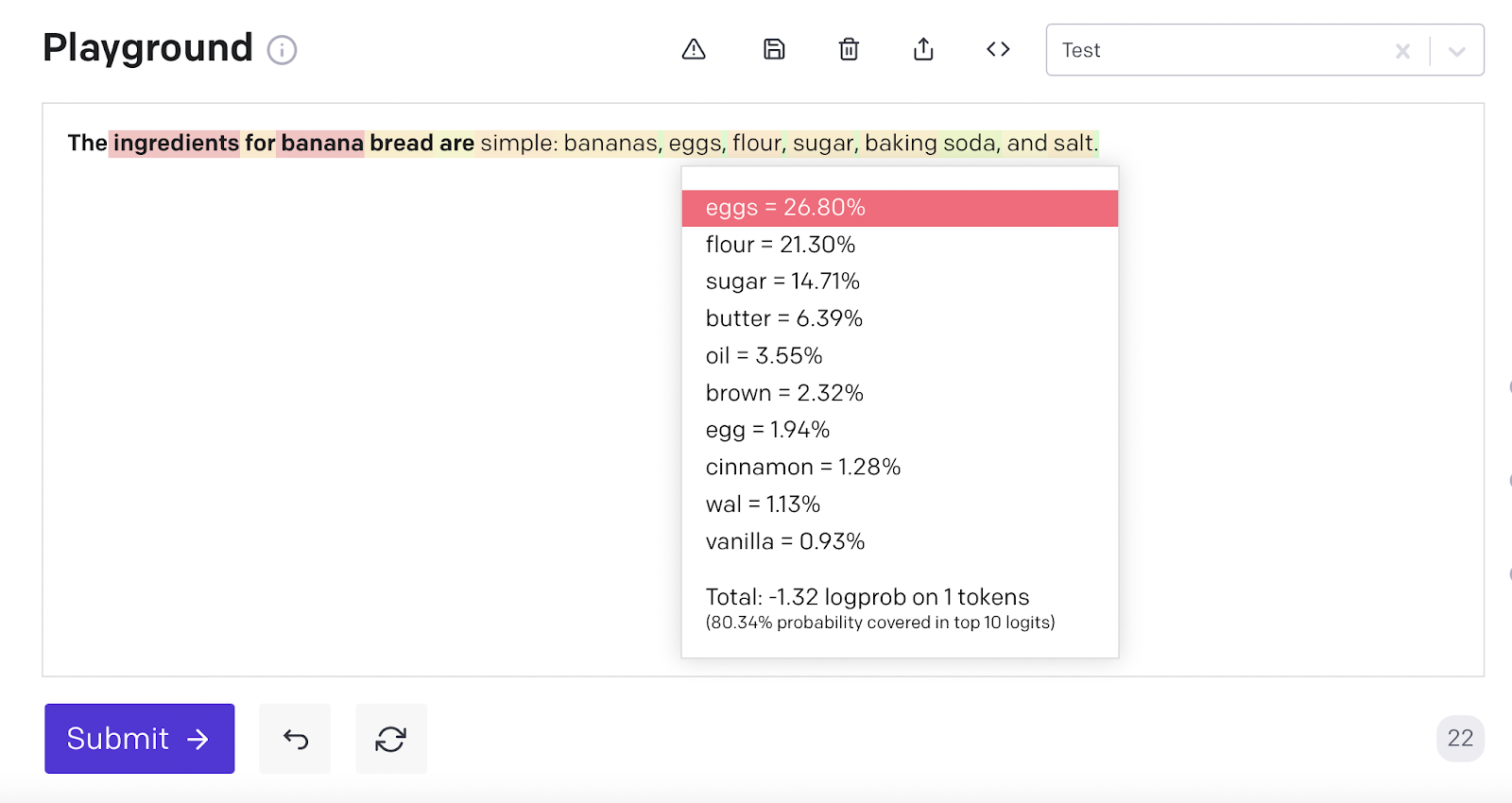 Since our AI Baking Assistant is sensitive about egg allergies, we can use our knowledge of tokens to set biases in the logit_bias parameter in order to discourage the model from generating a response that includes any variation of the word ‘egg’.

First, use this tokenizer tool to identify the tokens that we need to set the biases for.

The logit_bias parameter accepts bias values ranging between -100 to +100, with the extreme values resulting in either a ban (-100) or exclusive selection (100) of the relevant token.

Adding the logit biases to the prompt will modify the likelihood of the word ‘egg’ (and its variations) being included in the response for our banana bread prompt. The above prompt generates a response that does not include any eggs!

While we cannot guarantee that it will generate the best eggless banana bread recipe, the AI baking assistant fulfills its requirement of being considerate of the user’s egg allergies.

Did this answer your question?